A New Look at an Interesting & Puzzling Mammalian Order

Abstract: Desmostylians were a group of Mid-Tertiary marine mammals which bore superficial resemblance to modern Hippopotami. After enjoying a brief evolutionary radiation during the early and middle Miocene the group became extinct without descendants before the Miocene closed.

Although Desmostylian remains are known from a number of localities around the northern pacific rim they are generally of fragmentary nature. Do to several specialized adaptations Desmostylian habits and phylogenic affinities are highly speculative and many drastically different hypotheses have been proposed over the last century. New finds since the 1960’s have greatly expanded our knowledge of these animals.

The Miocene genera Desmostylus and Paleoparadoxia are now represented by mounted skeletons in both the U.S. and Japan and a newly described member, Behemotops, has pushed the groups known geologic range back into the Oligocene. Additionally, Behemotops offers new clues as to the origin of the Order Desmostylia. Tusk examples from Desmostylus, and cheekteeth from Paleoparadoxia and Desmostylus in the N.S. Brown collection are illustrated.

Unfortunately for us Desmostylians are extinct so we will never know their ecological niche, functional biology and behavioral habits with certainty any more then we can reconstruct a Mesozoic ecosystem with Dinosaurs and their cohabitants accurately. The surprise is that while the Mesozoic ended some 65 million years ago, Desmostylians survived until perhaps 6 million years ago (Latest Miocene) and were members of an ecosystem far more familiar to us then any of Mesozoic age.

However, like the Dinosaurs Desmostylians have no direct relatives to draw such information from, nor is there any living beast with a set of characters quite like those employed by Desmostylians. The genotype and best known member of the group Desmostylus was first described by O.C. Marsh in 1888 based on a single tooth and for much of the next century additional teeth and broken bits of skull material were the predominate finds. Ancestry for Desmostylians was tenable or nonexistent.

Fig. 1. Lower cheek tooth of adult Desmostylus, this type of tooth structure is unique among mammals and poses challenges for the determination of phylogeny and diet. Image courtesy of http://www.um.u-tokyo.ac.jp/digital/volume2.html/tenji_ honyurui1_31.html.

The rare and fragmentary remains of these creatures, in addition to their unique dentition and skeletal features led to numerous habitual and phylogenic interpretations throughout the years, although most workers placed them within the Order Sirenia along with the extant dugongs and Manatees.

A slow growing amount of new fossil evidence led the erecting of Order Desmostylia by R. Reinhart in 1953 which has been followed by most workers since. More recent finds starting in the 1960’s have clarified some of the mystery of Desmostylians, several complete or nearly complete specimens are now known for Desmostylus and Paleoparadoxia both of which are now represented by mounted museum displays in the U.S. and Japan.

Part of the problem for the fragmentary remains of Desmostylian material is do to the environment they inhabited which was near shore and shoreline, quite possibly living in pods as many Pinnipeds (Seals, Walrus, and Sea Lions) do today. An “active” environment such as this tends to destroy any potential fossil material before burial by mechanical abrasion, biological destruction or dissolution.

Another factor is the restricted Geographic and Geologic ranges in which Desmostylians occur which is limited to near shore marine sediments (mainly sandstone) principally of Miocene age (24 to 5 million years before present) along the North Pacific rim including Japan, Russia (Kamchatka Peninsula & Sakhalin Is. only), and the western coasts of Canada (B.C.) and the U.S. (see fig. 2) . Although most known specimens are from Japan, or the U.S. (Washington, Oregon & California). 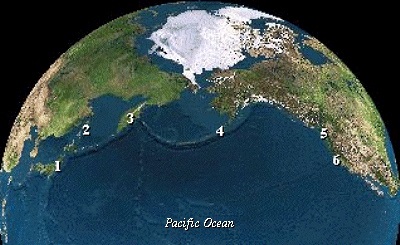 Unraveling the mystery of Desmostylians has been, and continues to be a slow and difficult process. Several researchers in Japan and the U.S. are continuing this effort and much new material awaits description and interpretation. After a thorough study N. Inuzuka (University of Tokyo, Japan) has deduced the Desmostylian stance was unlike any living mammal (closer to modern crocodiles) and has mounted the most complete Desmostylus specimen found in this manner (see fig. 3).

Other workers (D. Domning, Howard University, Washington D.C.) consider this stance exaggerated, suggesting the limbs should be tucked in closer to the body thus lifting the body higher off the ground and requiring less expenditure of energy in walking. 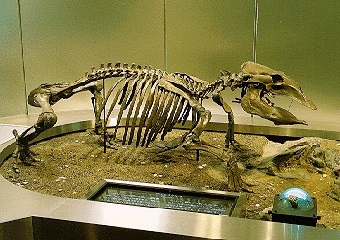 Fig. 3. The most complete specimen of Desmostylus hesperus known. This two-thirds grown individual was found by members of the Geological Survey of Japan (Utanobori, Hokkaido, Japan) in 1977 and was mounted under the direction of N. Inuzuka. Length 1.7 meters (5′ 7″) estimated weight 270 kg (about 600 lbs.) [immature]. See fig. 5, 6a & 6b for closeups of the skull and teeth. Image courtesy of http://www.gsj.go.jp/cGM/ tour/tour06e.html. 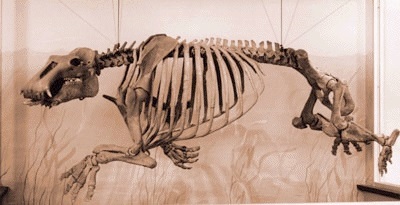 Fig 4. Paleoparadoxia sp. (undescribed) This specimen was found on the campus of Stanford University, Palo Alto, California during excavation for the linear accelerator in 1964 and is mounted in a swimming position. Domning suggests Desmostylians swam in Polar Bear fashion, with the fore-limbs used for locomotion and the hind-limbs for steering. Image courtesy of http://www2.slac.stanford.edu/vvc/paleo.html.

Difficulties also occur in determining the diet of these problematical mammals. As noted the cheek teeth were unlike any living or extinct mammals (see figures) and suggest remote ties with the Proboscideans (elephants and their extinct ancestors). These broad high crowned teeth offer a large surface grinding area indicating an abrasive diet. Suggestions of Desmostylian diet include Seaweed, Seagrass or possibly Clams. In addition to their unusual cheek teeth, tusks were present on some members of Desmostylus; some Early Miocene members possessed tusks on the upper and lower jaws (thus 4 total) and Middle Miocene forms with tusks only on the lowers !

Additional specimens may aid in addressing many remaining questions such as why tusks evolved and then disappeared, and when or if sexual dimorphism was expressed to name a few. Recently a new genus of Desmostylian has been described based on specimens found by an amateur collector in Oregon and Washington over a twenty year period.

Behemotops is of Late Oligocene age (about 27 million years before present) and therefore is the oldest and most primitive member of the group known. Several specimens are now known from both the U.S. and Japan which have shed some much needed light on Desmostylian ancestry and phylogeny. 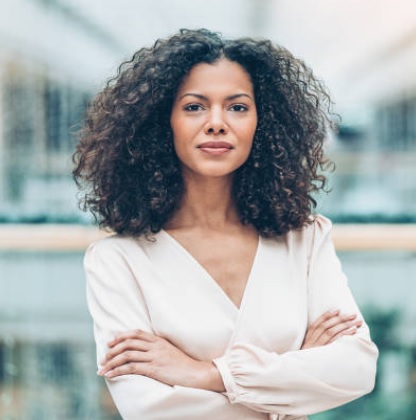 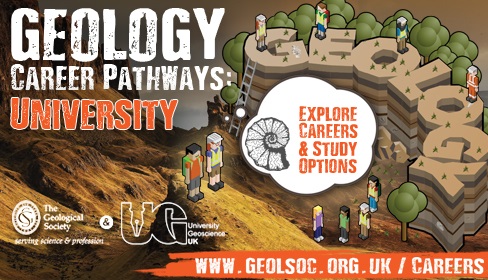 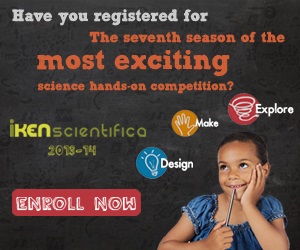 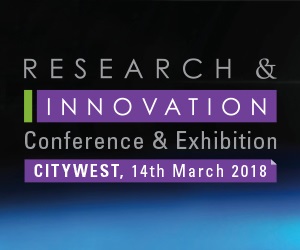